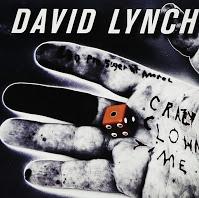 1. "Pinky's Dream" The sun was setting in the west. It's orange glow, littered with golden and pink hues, bathed the sky in light that was so bright, so beautiful, and so otherworldly, that the only thought running through Pinky's mind was getting as close to it as possible. The curvy mountain roads were no match for her determination. The windows were down, filling her vehicle with warm, dusty air. Her pink hair blew around in a Medusa-like style, but she didn't care - vanity be damned - it didn't matter anymore. Pinky kept her eyes focused on glimpses of the sunset. It eluded her around the mountain's twists and turns on her way up to an ideal vantage point. Her glare was so fixed it was impossible to keep her eyes from watering, but she refused to blink. It was ironic to her that despite all the sadness she'd felt in her life, she had no desire to cry in what she knew would be her final moments. In fact, it made her laugh. Pinky laughed as tears
Post a Comment
Read more 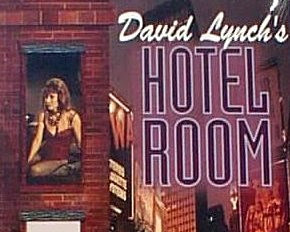 "For a millennium, the space for the hotel room existed, undefined. Mankind captured it, and gave it shape and passed through. And sometimes in passing through, they found themselves brushing up against the secret names of truth."  Written by:   Barry Gifford ,   David Lynch ,   Monty Montgomery,   &  Jay McInerney Directed by:   David Lynch  &  James Signorelli Music by:  Angelo Badalamenti Episode 1 - Tricks  Starring: Harry Dean Stanton , Freddi e Jon es & Glenn e Headly It takes place in September 1969. Moe, played by Harry Dean Stanton, Darlene, played by Glenne Headly, and Lou, played by Freddie Jones share a perverse encounter at the Railroad Hotel. Darlene - a hooker, is taken to hotel room #603 with Moe for a hook up. However, the night takes an odd turn when an acquaintance of Moe's, named Lou, shows up and crashes their party. The two men seem to have a grudge against each other over Moe's dead wif
Post a Comment
Read more 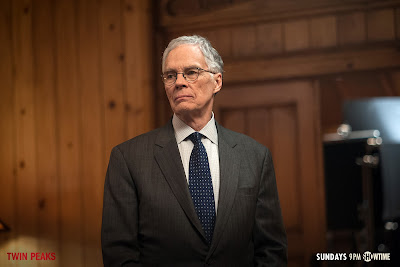 Who is Benjamin Horne; a lovable playboy or a self-serving deviant? Initially described by Agent Cooper in the pilot episode of Twin Peaks as a, "glad handing dandy," Ben Horne didn't seem like a very good person when we first met him in 1990. In fact, he looked to be a likely suspect in Laura Palmer's murder, not to mention an awful father, husband, arsonist, a scandalous businessman, a womanizer, and an attempted murderer. However, his character's arc in the original series took Ben on a very bumpy emotional ride. By the end of Season 2 he seemed to be a better man. Imploring the rules of goodness taught to him by none other than John Justice Wheeler, Ben appeared to have turned over a new leaf. Played brilliantly by the very talented Richard Beymer, Ben Horne's influence in Twin Peaks goes far beyond just the lives he affected, some positively, many negatively. His character creates a sort of moral compass for the show, proving that even the worst of
Post a Comment
Read more 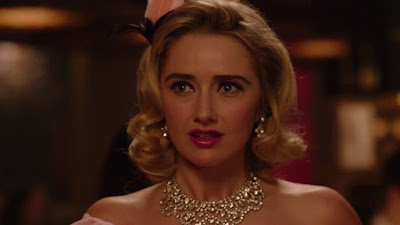 Twin Peaks: Season 3 was littered with amazing moments of humor, horror, and heartbreak. It was 18 hours full of unforgettable imagery, and loads of ambiguous mystery to stew about. As in the original series, Season 3 also offered a myriad of quotable dialogue, quirky characters, and laugh out loud scenes that were delightful for fans. Pictured above, although we didn't see her much until Part 10, Candie sure was fun to watch. Paired with the famed Mitchum Brothers, the whole team provided so much fun. Thinking of that, I thought it would be nice to put together a list of some of my personal favorite moments from Season 3. These were just my top picks, but honestly the entire season was a thrill to watch. It was hard to chose the "best", because there was so much to enjoy spread over the whole eighteen hours. Nonetheless, I had to make some choices, otherwise this post would be endless. Enjoy! The Best of Season 3 Mr Jackpots and his famous, "Hel
Post a Comment
Read more
More posts

Find Me On Social Media